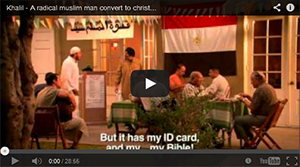 From Terrorist to Peacemaker

From Islam to Christ, a true story.

Khalil, A radical Egyptian terrorist changed from a murderous “Saul” to a forgiving “Paul” after Jesus Christ visited him in a soul-penetrating dream. This hater of both Christians and Jews set out to discredit the Bible, but instead, when comparing the Bible to the Qur’an, he came to see that the Bible, not The Qur’an, is the true Word of God. His transformation became complete when Jesus appeared to him in a dream and sealed his faith.

It is reported that among African Muslims: “42 percent of the new believers come to Christ through visions, dreams, angelic appearances and hearing God’s voice.”

Humankind can do all it can to discredit the Holy Scriptures, but as it is said in the video “… The Book can never be lost…”. Furthermore, Christ has given us the final proof of His life and resurrection, which is the seal of the Holy Spirit living in our hearts after we accept Jesus as Lord. The evidence of this is a transformed life, such as we see with Khalil.

God is working in the world today as He has always done, in a personal manner, responding to the earnest seeker as he or she cries out to God. In the Bible, God’s manner of dealing with mankind in this, the Church age, is clearly described in the Book of Acts. What you can read about in Acts you will also see in this video. God does not change.

May this video be a great blessing to you!

Can be sure that Jesus rose from the dead?

The Necessity of Christ Being God