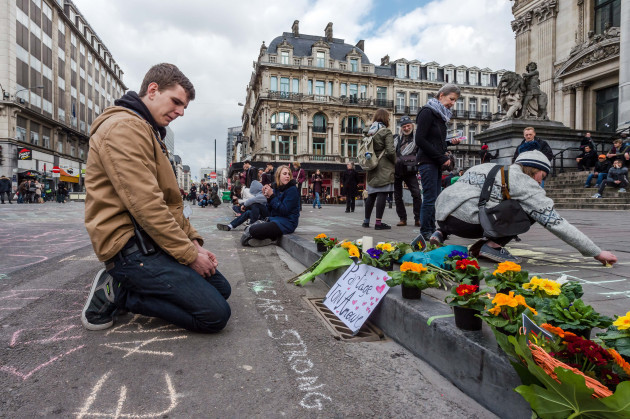 The story behind terrorist activity in Belgium and France

Why are they doing this?

Every time there is a terrorist attack, we hear a variety of explanations of the same sad event. From the news media to government leaders, these evil actions are seen and viewed in different ways. But the question is: Do we want to know the truth? Or do we prefer a version that is sanitized for the sake of tolerance? Do we want to know what really happened along with the reasons behind it so that our Lord may use us as instruments to protect our country, or do we instead fear those who have bombs and swords and other weapons to destroy us?

Here are some ways in which we are prevented from knowing the truth.

Fear… The purpose of terrorism is to create fear with a view to submission. Our fear fuels their mission. The mission of terrorists is to dominate the world by forcing their beliefs on as many as they can, and killing or isolating those who do not submit to them. They do this out of a supposed obedience to their god. Verses in the Quran that encourage this are as follows: 2: 191 “And slay them wherever ye catch them, and turn them out from where they have turned you out; for tumult and oppression are worse than slaughter; but fight them not at the Sacred Mosque, unless they (first) fight you there; but if they fight you, slay them. Such is the reward of those who suppress faith.” Quran 2:193 “And fight them on until there is no more tumult or oppression, and there prevail justice and faith in Allah; but if they cease, let there be no hostility except to those who practise oppression” and Quran 9:29 “Fight those who believe not in Allah nor the Last Day, nor hold that forbidden which hath been forbidden by Allah and His Messenger, nor acknowledge the Religion of Truth, from among the People of the Book, until they pay the Jizya with willing submission, and feel themselves subdued.”

As an alternative to fear we must boldly tell the truth that Islam is not a religion of peace. Their book does not teach peace. We should love Muslims and pray for them. But we should also be honest about what the Quran teaches, that every non-Muslim deserves to be killed, and also why this is justified in the minds of many Muslims.

Appeasement will not make you safe because their religion does not allow for tolerance of other faiths.

Ignorance… The West does not know the reality of Islam, because what they know about Islam comes from Muslims themselves. The problem is that Muslims will not tell the truth about their religion because they consider themselves in a battle with non-Muslims. In times of war or battle, one of the weapons permitted is that of deception, which is allowed for the sake of defending Islam. In fact, Muslims are commanded to deceive and lie to their enemy. This is a big problem for the West, a culture that is committed to tolerance. (The media, for example, did not mention the ties to Islam in the wake of the attacks in Belgium.) Therefore the only way to know the reality of Islam is by studying both their holy book and their history.

How does all of this square with what we see and experience? Our Muslims neighbours are nice and peaceful people. Many of them do not know what the Quran teaches. Yet when Muslims are in fact faithful to the Quran and the other religious books of Islam, they can become activists and terrorists, because Islam is clear about who the enemies are and what they are to do to their enemies.

Read Quran: 8: 65 — “O Prophet rouse the Believers to the fight. If there are twenty amongst you, patient and persevering, they will vanquish two hundred: if a hundred they will vanquish a thousand of the Unbelievers: for these are a people without understanding” .

Read Quran 9: 14 — “Fight them and Allah will punish them by your hands, cover them with shame, help you to victory over them, Heal the breasts of Believers.”

Imam Abdullah Yusuf Ali, comments on this verse saying,”When Allah’s Law is established, the fire of indignation is quelled, and the true Peace of Islam is attained” (The Meaning of the Quran).

This means that the peaceful Muslim does not really know the Quran or does not accept what it has to say. Let me share an example. Remember what the terrorists did in France and Belgium recently. A man named Salah Abdeslam was one of those who planned the Paris attacks. He was born into a Muslim home in Belgium but did not live the faith. After finishing school he managed a café in Belgium. He was jailed for his involvement in illegal drugs. While in jail he met a member of ISIS. He was converted to Islam and became an ISIS recruiter. He helped plan the Paris attacks, and his group was involved in the destruction in Belgium.

To believe what is written in the Quran and to practice its means a life of activism whose end result for some is terrorism, not pacifism. It puts a lie to the mantra of politicians who say that Islam is a religion of peace. The peace supposedly will only come when the entire world submits to Islam.

Quran: 8:60 says — “Against them make ready your strength to the utmost of your power, including steeds of war, to strike terror into (the hearts) of the enemies of Allah (god) and your enemies …”

How do we respond? Christian love should compel us to reach out to them with the gospel of Jesus Christ and to pray for them, that our Lord will open their eyes to know the true God. Consider Romans 13: 8-10 in this regard: Owe no one anything, except to love each other, for the one who loves another has fulfilled the law. For the commandments, “You shall not commit adultery, You shall not murder, You shall not steal, You shall not covet,” and any other commandment, are summed up in this word: “You shall love your neighbour as yourself.” Love does no wrong to a neighbour; therefore love is the fulfilling of the law.

This site uses Akismet to reduce spam. Learn how your comment data is processed.